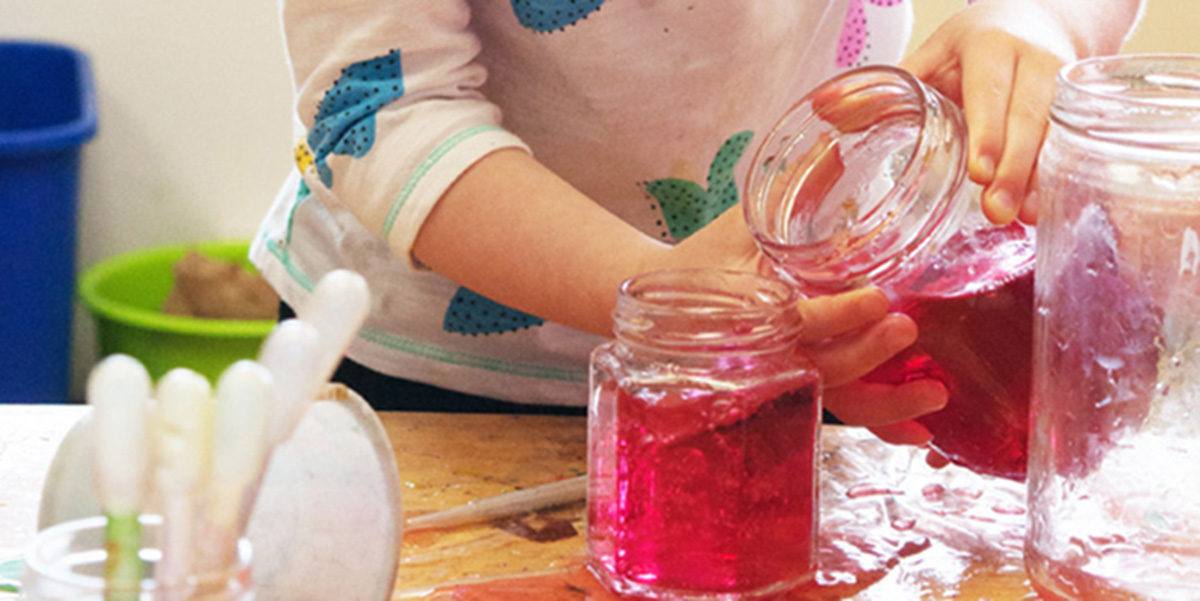 Reflection is a vital part of the educator’s practice in the Reggio Emilia approach.

As educators, we come across hundreds of “AHA moments” in our journeys with the children. It is difficult to remember all these moments, and so the practice of reflection makes it possible for us to stop, think and learn from our everyday experiences.

Today’s blog is from Sves, one of our educators at our Nootka School Age Program. As Sves shares their “AHA moment”, note how the practice of reflection helped them see the situation from a different perspective – they were able to be flexible with their ideas, more deeply understanding the children’s 100 languages.

For the past few months the children at our program have been interested in potions. They have been mixing paint, sticks, leaves, flower petals, etc. together to make perfumes and potions.

Thinking about this and considering the overall interest of children in nature, I decided to ask a question:

"How can we colour our potions with the world around us?"

Peter ran over to the garden and his friends followed him he started scooping up the dirt with his hands and putting it in his jar. The dirt fell into the jar and off the sides of the jar, and onto the pavement below.

Robin mimicked what Peter had done and was putting dirt in his jar.

Robin: "Oh I'm going to put some leaves into my jar and it is going to make my jar more blue." After a while, Robin came up to me as I sat outside on the plastic tarp and told me that he wanted to leave the potion out in the sun so it could get brighter.

I asked him how it could get brighter.

Robin replied: "did you know chloroplast in leaves will make the water green if we leave it overnight? The potion in the sun make it [the colour of water] brighter."

Sves: "How does this happen?"

Robin: "Sun evaporates the water and makes it brighter"

Looking at Robin's potion bottle,  I noticed that there was a bright blue with a layer of dirt and soap floating on the top of the water.

Robin continued: "this is good for the observation station," referring to an area in Nootka's room where we save things to observe further and study.

Going with Robin’s idea, we brought the bottles filled with various mixtures and potions to the observation station.

The bottles were filled with water with small pebbles settled at the bottoms. There were also old milk containers with different spices floating on the top. Instead of seeing/viewing the bottles filled with miscellaneous unknown substances and dumping them out because they had no value (to me), I let them sit.

One afternoon I came to a bottle filled with water and green tissue paper, and orbeez. I was puzzled. I couldn't find a meaning to the potion. Why on earth would someone put this stuff in a bottle and leave it here? What is the use of this???

I started asking around to see who was responsible for this mess.

But then I stopped and I started to look at the bottle with wonder; beyond this idea of “clean up!”; “This is messy!”; “Everything needs to be used a certain way!” And noticed: The green tissue paper had become soft, transparent and floated in the water mingling with some over-saturated orbeez.

I started to think: Would it matter if I found who made them?

We left the bottles on the display case for other children to find, to notice, to observe, and to play with.